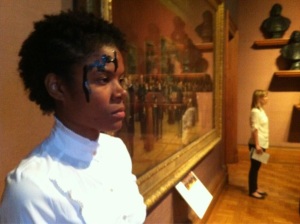 Earlier this afternoon 25 performers scattered throughout the National Portrait Gallery simultaneously had oil poured over their faces in a dramatic protest against the gallery celebrating 25 years of sponsorship from controversial oil company BP.

The performance took place just days ahead of the gallery’s BP Portrait Award 2014 prize ceremony on Tuesday 24 June and exhibition opening to the public Thursday (26 June), and was carried out by BP or not BP?, Liberate Tate, London Rising Tide and Shell Out Sounds – a number of groups from the Art Not Oil coalition of organisations seeking an end to oil-industry sponsorship of the arts. 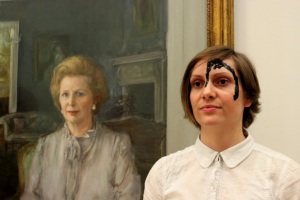 The protest piece, entitled ‘25 Portraits in Oil’, created 25 portraits of oil-smeared faces from across the gallery, one for each year that BP has sponsored the award, and highlighted the role the National Portrait Gallery is playing in exacerbating climate change by legitimising the devastating impacts of fossil fuel companies. The nearby ‘official’ portraits were chosen by the performers to map out a timeline of British history and the fossil fuel industry.
The National Portrait Gallery is celebrating the 25th anniversary year of its partnership amidst widespread appeals for the institution to stop supporting BP as oil sponsorship has become the unacceptable face of British arts and culture in a time of climate change.

One of the performers, Anna Johnson, said:

“Any celebration of British art bearing BP’s logo is also endorsing that company’s business model which is wholly based on the destruction of a safe, liveable climate. The National Portrait Gallery is marketing BP as socially responsible when it is one of three main companies most responsible for climate change. It’s time for public arts institutions to stop being publicity agents for Big Oil.

Art Not Oil is encouraging the National Portrait Gallery and other public institutions that support BP such as the Tate and British Museum to take leadership by playing a positive role to address climate change, rather than being part of the problem.

Since 1989, when BP was brought in to sponsor the Portrait Award, much has changed: the scientific evidence of climate change due to burning hydrocarbons and the negative social and environmental impacts of oil companies, BP in particular, are now clear and far more widely known amongst the increasingly climate-conscious public, including art lovers. Many gallery-goers have expressed a desire to see exhibitions without being made complicit in social and environmental destruction.

“Not long ago tobacco companies were seen as respectable partners for public institutions such as the National Portrait Gallery. That is no longer the case. Fossil fuel companies are now being seen in the same light. The public is rapidly coming to recognise that the BP and Shell sponsorship programmes are attempts to buy a better image by companies with huge negative impacts on human rights, the environment and our global climate. Cultural leaders should simply stop accepting dirty money from oil companies to promote fossil fuels.”

The National Portrait Gallery has seen over a decade of protests on its oil company links. In recent years, a growing movement of artists, activists and art lovers is mobilising for public institutions to stop taking money to undertake publicity for climate-changing companies.

Earlier this year, Nobel Laureate Desmond Tutu called for action by ‘people of conscience’ against arts and sports programming sponsored by fossil fuel companies, saying: “Twenty-five years ago people could be excused for not knowing or doing much about climate change. Today we have no excuse. Companies responsible for emitting carbon and accelerating climate change are not simply going to give up. They need persuasion from the likes of us [and] our cultural institutions to cut their ties to the fossil-fuel industry.”

‘25 Portraits in Oil’ comes after a series of protests at the British Museum and at both London Tate galleries regarding BP. On 15 June protestors dressed as Vikings carried a longboat into the British Museum. The last Shell Classic concert was celebrated by Art Not Oil on 8 June, since the Southbank Centre has ended this sponsorship arrangement.