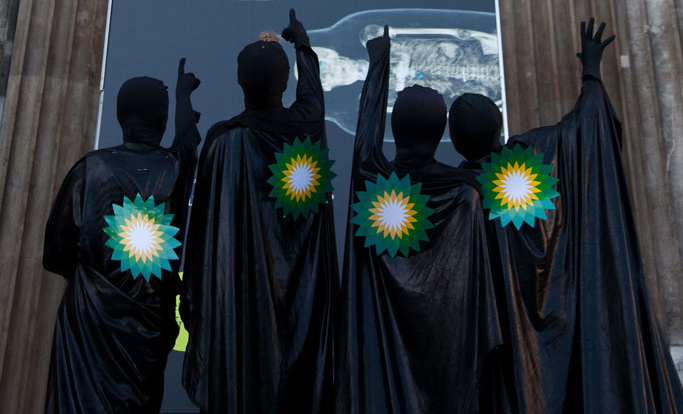 For interviews and photos contact “BP or not BP?” on info@bp-or-not-bp.org

New figures we can reveal today have shown that the donation behind BP’s controversial sponsorship deal with the British Museum is embarrassingly small. Following a Freedom of Information request, the British Museum disclosed that BP donated an average of £596,000 a year from 2000 to 2011 – just 0.8% of the museum’s income. The revelation comes just weeks after an information tribunal forced Tate galleries to reveal BP sponsorship amounts: £240,000 a year on average.

On Sunday, over 200 people plan to take part in a “detective flashmob” at the British Museum, helping to “track down the dastardly BP” and protest the controversial partnership. The oil company is subject to the largest criminal fine in history ($4.5 billion) for its role in the Deepwater Horizon disaster.

Chris Garrard, a campaigner with the Art Not Oil coalition, said:

“It’s clear that BP’s sponsorship deal with the British Museum has nothing to do with philanthropy. This meagre donation has allowed BP to hide its corporate crimes by buying a veil of social legitimacy that it does not deserve. An unpleasant irony is that many of the cultures celebrated in the British Museum are those that are already experiencing the impacts of climate change, fuelled by BP’s relentless search for oil. The museum’s director, Neil MacGregor, should join the growing wave of universities, faith and government institutions breaking their ties with the fossil fuel industry and get to work removing BP’s logos from the British Museum.”

“BP or not BP?”, the theatre group behind Sunday’s flashmob, have planned their protest to coincide with the last day of Museum Week, a global initiative to celebrate culture involving 2000 major institutions. Their protest will come days after 36 leading climate scientists wrote an open letter to American museums and galleries, urging them to break their ties with the fossil fuel industry.

Rhiannon Kelly, one of our performers, said:

“We’re inviting people to dress as their favourite detectives, from Sherlock Holmes to Scooby-doo, and to track down the world’s biggest corporate criminal. Once caught, we’ll put BP on trial for its climate crimes, from extracting highly polluting tar sands oil in Canada, to partnering with the Russian state-owned oil company Rosneft in order to drill in the hazardous and vulnerable Arctic.”

Having pleaded guilty to fourteen criminal charges over the Deepwater Horizon disaster in 2012, BP is now in court facing a fine of up to $13.7 billion under the US Clean Water Act – with other claims still to come. In 2014, a senior judge in the case ruled that BP bore the majority of the responsibility for Deepwater Horizon, due to the company’s “grossly negligent” behaviour.

“Scientists recently discovered a 10 million gallon mat of BP’s oil on the floor of the Gulf of Mexico – a mat the size of Rhode Island. They called it a ‘conduit of contamination into the food web.’ That is the same food web that all humankind depends on to sustain life. BP is a criminal against all humankind, and so is any entity that harbours such a criminal. It is time for humanity to stand together and push out all who seek to destroy us. The British Museum must decide exactly whose side it is on – BP’s or the world’s?”

To date, “BP or not BP?” have held eight performance protests against BP inside the British Museum. Last month, the group gave a Sherlock Holmes-themed performance, setting the scene for Sunday’s flashmob. Other performances have included a series of Viking invasions in protest at last summer’s BP-branded Vikings Exhibition and a Shakespearean flashmob to coincide with the 2012 BP-sponsored Shakespeare exhibition.

BP has been a sponsor of the British Museum since 1996. In 2012 BP publicly declared it was providing £10 million over five years to four cultural institutions – British Museum, Tate, National Portrait Gallery and Royal Opera House. All four institutions have faced creative protest against their decisions to support BP. The British Museum’s next BP-sponsored exhibition, Indigenous Australia: enduring civilisation, opens on 23rd April.