Today, Edinburgh International Festival (EIF) faced two performance protests targeting its controversial Festival Partner, BP. Acclaimed actor, Simon McBurney, who is getting five-star reviews for his EIF show ‘The Encounter’, joined the performers, along with Fringe First winner Daniel Bye and MSP Alison Johnstone. At the doors of the iconic Usher Hall building, one of the main EIF venues, the group of 30 recreated BP’s Gulf of Mexico spill with a theatre piece called ‘Gross Negligence’.

The group then moved into EIF HQ – “The Hub” – where they filled the corridor with song before ripping the BP logo out of their programmes and leaving them, free from oil sponsorship, in the building’s foyer. They then recreated the spill once more, just outside the front door. Many Festival-goers took flyers and some expressed their support.

The performance was organized by activist theatre group BP or not BP?, Friends of the Earth Scotland and Edinburgh University People & Planet. They were also joined by representatives of the PCS Union, who support the campaign against oil sponsorship of the arts and recently joined the Art Not Oil coalition.

Chris Garrard from BP or not BP? said:

‘This marks the beginning of the end of BP’s sponsorship of the Edinburgh International Festival. With leading artists speaking out against the sponsors of their own shows, the festival has to listen. If the festival is genuinely committed to sustainability, that has to apply to its sponsors too. BP is just one of many – there’s no reason why it can’t be replaced.’

“For me, art is a way of asking questions about this world and imagining a better one. It doesn’t help for the greatest arts festival in the world to be sponsored by an organisation actively committed to making the world worse.”

“Scotland has world leading climate targets and a fast-growing renewable energy industry.  Our universities and faith groups are ditching their ties with fossil fuels.  Speaking to people at the festival today a lot of folk seem to agree that we should not let climate-wrecking companies like BP use Scotland’s treasured public arts to buy a veneer of respectability.” 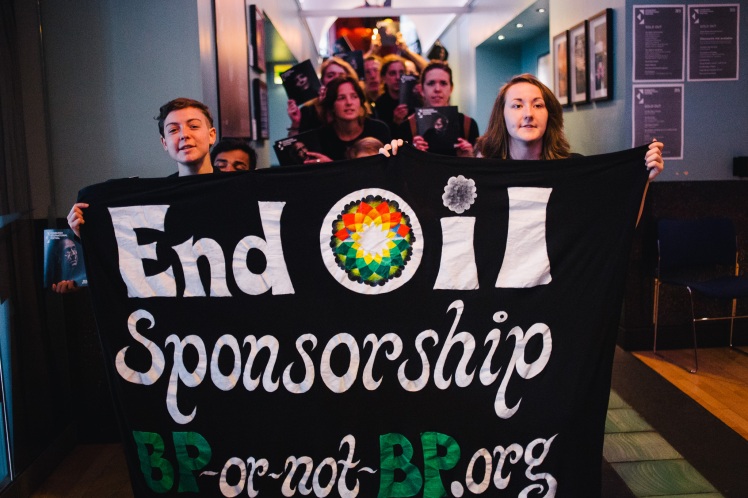 “We need to expose this absurd and dangerous act of greenwashing by a company that is contributing to catastrophic climate change. With the triumph of our occupation this year, which forced Edinburgh University to drop its investments in three major fossil fuel companies, it is clear the fossil fuel divestment movement is winning. The EIF needs to get its act together instead of remaining complicit in the destruction of our planet.”

The performers created an arresting and poignant image of the impacts of the Gulf of Mexico spill, from oil-covered birds and turtles to a cleanup worker suffering sickness from the effects of cleanup chemicals and toxins. During the performance, 11 white roses were laid at the front of the fabric spill, commemorating the 11 rig workers who lost their lives when the Deepwater Horizon rig first exploded. Interspersed through a sung refrain of the words ‘Gross negligence/caused the spill from BP/Gross deception/time to set the festival free’ a poem was spoken, bringing to life the impacts of BP’s operations on wildlife, workers and the climate. The music rose to an energetic chorus at the end of ‘BP must go!’

BP has sponsored the EIF for 34 years. The oil giant’s sponsorship of other high-profile arts organisations, including the British Museum and Tate, has been a target for a growing number of creative and disruptive protests in recent months. Campaigners and artists are concerned that cultural institutions are giving BP legitimacy while the company continues to extract unsustainable levels of fossil fuels, including the most highly-destructive such as tar sands, fracking, deepwater and Arctic drilling. Meanwhile, BP uses its influence to lobby against effective climate action.

BP recently officially became the world’s biggest corporate criminal, following a record-breaking $4.5 billion legal payout in 2012 and a further $18.7 billion fine last month, for its role in the catastrophic Deepwater Horizon disaster. BP also has close relationships with repressive regimes such as Azerbaijan, Russia and Indonesia (West Papua), and is being sued for complicity in human rights abuses in Colombia.

BP or not BP? is part of the Art Not Oil coalition, and all the groups involved are part of the growing international campaign for fossil fuel divestment. There is a Facebook event for participants to register their interest.

Caused the spill from BP

Time to set the festival free

Sung underneath each verse;

The harshest judgement he could hand down

BP is guilty – it caused the disaster

But what does “gross negligence” mean?

It means, for the workers, unending trauma.

It means, for the birds, choking and sinking

Preening to get clean, swallowing oil

It means, for the turtles, disorientation:

Home has become an inky-black soup

They must lay their eggs on oily-black beaches

The babies hatch straight into crude.

It means, for the fishers, the end of the world:

It means, for the cleanup crew, crippling sickness

Toxic dispersants and no safety gear.

It means, for the rest of us, more global warming

As BP sucks every last drop of oil dry

Its plan is to let the world fry.

It means we must wipe BP off this planet

A fossil-free future can become true

It will happen when BP is shunned by its champions

Edinburgh Festival – it’s up to you!