•    Ian Hislop’s I Object exhibition of “objects of dissent” at British Museum has been gatecrashed by a performance protest
•    Performers have set up their own protest exhibition inside the protest exhibition, to challenge the British Museum’s sponsorship deal with BP
•    Performers are acting as “rebel curators”, presenting objects to the public that represent BP’s complicity in the repression of dissent around the world
•    Objects include a banned freedom flag from West Papua and a tear gas canister from the Egyptian revolution
•    Performers are also highlighting why the museum should not be promoting an oil company at a time of climate crisis 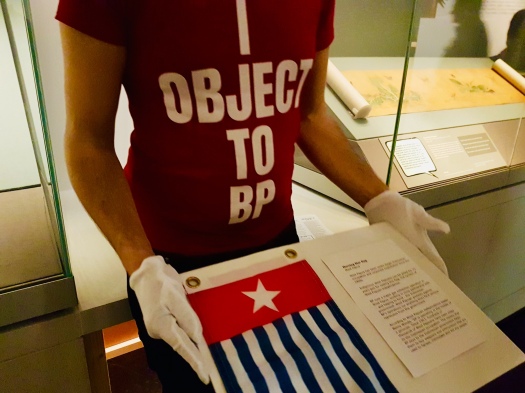 Right now (2.45pm), performers from the activist theatre troupe BP or not BP? have set up a series of “rebel exhibits” inside the British Museum’s I Object exhibition, without permission, in protest at the museum’s partnership with the oil giant BP. Museum security have decided to allow the protest to take place, and the performers intend to stay in the space engaging with museum visitors for the rest of the afternoon.

The I Object exhibition, curated by Ian Hislop, showcases “objects of dissent” from the British Museum’s collection. Today’s performance aims to highlight the irony of the museum celebrating protest and dissent while also promoting BP, a company that works closely with, and helps to fund, repressive regimes around the world. BP benefits directly from the silencing of protest against its operations in multiple countries, including Egypt, West Papua and Azerbaijan.

The seven performers entered the exhibition at 2pm, then revealed matching T-shirts with the words “I Object to BP” and took up positions between the existing exhibits. Acting as rebel curators and displaying items on purpose-built trays, they are showing the public four sets of objects that represent BP’s role in supporting the repression of protest around the world. These objects include:

–    a tear gas canister from the 2011 Egyptian revolution
–    a photo of Gilberto Torres, a Colombian trade unionist who was kidnapped and tortured for standing up to the oil industry
–    a “Morning Star” independence flag, banned in West Papua
–    a waistcoat and bow tie confiscated by the British Museum during a performance protest against BP sponsorship in 2016

More details about each object can be found below.

We like to think this sign at the entrance to the @britishmuseum #IObject edition is a subtle nod to us… pic.twitter.com/1VQHIxErSb

Each object is accompanied by a label with more information and relevant quotes. For example, the photograph of Gilberto Torres is accompanied by the following quote from the trade unionist: “In the year 2002 I was kidnapped and held for 42 days by paramilitary groups, backed by the Colombian state and, I believe, by multinational oil companies, including, among others, BP”. In 2015, Gilberto Torres started legal action against BP for its alleged role in his kidnapping, but was forced to withdraw the case in 2016. He explained at the time:

“The law in the UK allows multinationals to avoid justice by relying on local companies, state forces and even illegally armed groups to facilitate their activities, with no legal liability. Until the law is reformed, and until the US and the UK take responsibility for the intended or unintended consequences of oil extraction by companies like BP, people like me from communities like mine will not be able to access justice.”

The Morning Star flag represents the freedom struggle of the Indigenous West Papuan people, whose lands have been under Indonesian military occupation since the 1960s. According to West Papuan leader Benny Wenda:

“BP is operating in the middle of a genocide. Since 1963, hundreds of thousands of West Papuans have been killed by the Indonesian occupation. The money that BP pays to the Indonesian government helps them to buy weapons and ammunition that are used to harass, intimidate and kill my people.”

The performers are also distributing “exhibition guides” that explain the story of each object and criticise the museum for helping to boost the image of an oil giant at a time of climate emergency. A UN climate science report released earlier this month says that we need a radical reduction in fossil fuel use over the next twelve years to prevent widespread climate catastrophe in the next few decades. According to Sarah Horne, one of the performers:

“BP uses its wealth and influence to lobby politicians, weaken climate legislation and block clean energy alternatives. Fossil fuel companies like BP are working hard to keep us hooked on their products, just when we need an urgent shift away from these dirty fuels to prevent unthinkable global disaster within most of our lifetimes. Meanwhile, the people challenging BP’s polluting operations and defending our shared climate – especially Indigenous people and communities in the Global South – often face brutal repression from governments working hand in hand with the oil giant.

“The British Museum should not be helping BP to cover up these misdeeds and present a false, friendly face to the world. It is deeply ironic that the museum is running an exhibition celebrating dissent and protest while promoting a company that benefits directly from crackdowns on dissent. If the museum really supports the right of people to speak out and challenge the powerful, then it needs to drop BP.”

Ironic, right – we’re displaying our sparkly waistcoats today at the @britishmuseum #IObject exhibition on protest today… The last time we bought them here as part of a protest against sponsor @BP_plc the museum confiscated them. pic.twitter.com/jXL9AOa1JB

So far, the performers have not been removed from the space and are interacting freely with the public. They plan to stay for the rest of the afternoon.

Object labels used in the exhibition:

West Papua has been under illegal Indonesian occupation and corporate exploitation since the 1960s.

Indigenous West Papuans can be jailed for 15 years just for raising this flag, the symbol of West Papuan independence.

BP runs a major gas extraction operation in West Papua, working in close partnership with – and helping to fund – the Indonesian government. West Papuan protests against BP’s operations (or anything else) face serious repression from the government.

According to West Papuan independence leader Benny Wenda, “BP is operating in the middle of a genocide. Since 1963, hundreds of thousands of West Papuans have been killed by the Indonesian occupation. The money that BP pays to the Indonesian government helps them to buy weapons and ammunition that are used to harass, intimidate and kill my people.”

Oil worker Gilberto Torres – pictured here – was kidnapped after staging a protest in response to the disappearance of Aury Sará Marrugo. Aury was president of the Colombian oil workers’ union USO.
“In the year 2002 I was kidnapped and held for 42 days by paramilitary groups, backed by the Colombian state and, I believe, by multinational oil companies, including, among others, BP”, Gilberto says.
In this photograph, Gilberto holds an image of Aury, who did not survive his kidnapping. Gilberto is one of only two trade unionists in Colombia to have survived their abduction. In 2015 he took legal action in the UK against BP for their alleged involvement in his kidnapping, but in 2016 he had to withdraw his case, partly due to a lack of resources and weak laws to protect the victims of human rights abuses.
At the time, Gilberto Torres said: “The law in the UK allows multinationals to avoid justice by relying on local companies, state forces and even illegally armed groups to facilitate their activities, with no legal liability. Until the law is reformed, and until the US and the UK take responsibility for the intended or unintended consequences of oil extraction by companies like BP, people like me from communities like mine will not be able to access justice.”

BP is the largest foreign investor in Egypt, extracting oil and gas from beneath the Red Sea, Mediterranean and Nile Delta. Each time the regime has changed in Egypt, BP has swiftly renewed its contract with those in power, ignoring human rights abuses and repression.

In 2012, BP sponsored a business lobby organization (AmCham) that enthusiastically welcomed the use of executions and force to crack down on protest in Egypt. Under the current Egyptian president, Abdel Fattah el-Sisi, thousands have been disappeared, often taken to secret detention where they are tortured. Repressive new protest laws in 2015 benefited BP by silencing local opposition to a proposed BP gas plant at Idku, allowing the project to go ahead.

This tear gas cartridge was retrieved when police fired it at protests in Cairo in 2011, as the people demanded greater rights and freedoms. Tear gas was one of many weapons used to control, contain and repress the protesters, causing severe eye and respiratory injuries. Over 40 Egyptians were killed due to tear gas inhalation during the uprisings.

These items were confiscated by British Museum security, to prevent them being used in a protest performance by BP or not BP? in May 2016.

The museum claims to confiscate objects via bag searches for reasons of safety. It is unclear exactly what risk this waistcoat and bow tie posed to the public.

The performance went ahead without these items. 50 performers created a spoof game show inside the museum’s Great Court, with questions about how little money the British Museum gets from BP (less than 0.5% of the museum’s income), and how much BP’s operations are subsidised by UK taxpayers (over £210 million per year). In fact, BP receives about 100 times more money from the public purse each year than the oil company provides to the arts in sponsorship.

Also displayed: Relevant pages of a 2016 report by Art Not Oil, based on Freedom of Information material that shows a disturbingly close relationship between BP’s security team and the British Museum, as they work together to “manage” any protest against BP in the museum.